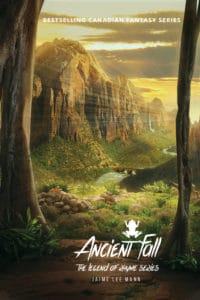 The enchanted land of Coraira has died, preventing entry for twins Asher and Ariana Caine. They are now trapped alone in the realm of ice and snow, unable to use their magical powers to escape.

Meanwhile, the wise Ancients—the twins’ mentors—have each been stolen by a mysterious cloud. Vengeful Mother Earth has finally decided to fight back against the humans who have been abusing her for centuries.

Through a series of visions and prophecies, it becomes evident that a dark curse may be responsible for humanity’s actions. Now, the curse must be broken before the rare twin moons reach their highest point in the sky if there is to be any hope that Mother Earth will return the world to humankind.

Will the Caine twins make it out of the ice realm alive?

Will the heirs of Elora and Larque figure out how to lift the curse?

And what will happen to everyone if Mother Earth wins?

DOWNLOAD AN EXCERPT FROM THE SEVENTH NOVEL IN THE LEGEND OF RHYME SERIES, ANCIENT FALL (390 downloads)